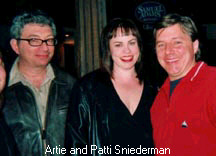 Sometimes it's just so damn hard to play a good gig.
I mean it was just so fabulous in NYC a couple of weeks ago. Everything came together.
All the necessary elements were present: the weather, the parking space, the excited audience and the stage sound. Just everything. This gig, however, just didn't seem to come together. I just couldn't get "hooked up". I'm talking about me personally. I just didn't feel it. I really don't know how it actually sounded out there but to me it just didn't feel like it sounded good and I always want it to sound good. All musicians want it to sound good. Ya know what I mean?

In a perfect world it really shouldn't matter how many people show up because when people make an effort to show up at these gigs it says something. It says something good.
All these good people here tonight came out to be a part of the night (myself included). We thought about it. We showered and shaved (or whatever). Decided on the clothes, the shoes, what jacket, what hairstyle. Should I wash the car? How much can I spend? How close will I be able to park? Just a whole bunch o'stuff to consider before you even walk through that door. Do you know what I'm talking about? I think about it all week. I go to my dumb day job and think about this stuff! 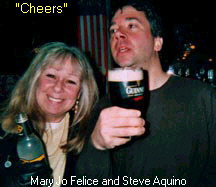 I will now quote my good friend and Lyres drummer Paul Murphy "I don't care if only one person shows up. I wanna play good for that one person." Man! I am SO THERE. I want to rock my balls off even if only one person shows up, but man, it just doesn't always happen that way. Ask any working musician. I tend to blame it on external stimuli. "We started off with a shitty song.", "My amp sounded like shit.", "My girlfriend is pissed off at me.", "The guitar player is too loud.", It's all a bunch of CRAP!!! Let's face it. It's either there or it's not. If I could figure out what makes it good I would damn well make it good every single time. Wouldn't I?

I remember playing a gig in Tulsa, Oklahoma. We were on our way to Sacramento, California from Chicago. Just a small town covered in snow. Our guarantee at this particular club would provide for two small rooms at a fleabag motel. A pretty good deal on a weeknight with two days to get our destination in California. When we showed up it wasn't even a club at all! Just a small room rented out by a diehard Lyres fan/record collector who had hoped to cover his expenses by advertising his gig at the local record store. The floor was flooded in water and he had but one plastic mic stand. None of us had ever seen a plastic mic stand before. A dozen people showed up and the 3.2 Budweiser flowed like water (literally if ya know what I mean).

It was a great gig. We sounded like rock gods. We played like 18 encores. After it was over Mr. Lyres fan/record collector passed a hat around and apologetically handed us ten bucks. Tomorrow we would be in sunny California playing for two thousand well-tanned college kids in shorts and tee shirts. Tonight we have plastic mic stands and near beer! What makes a gig in this frozen Midwestern town with a population of 12 feel better than a slick big money college gig? Why do I remember this small town gig and have absolutely no recollection of the big time college gig? When you find out let me know. I could bottle it and sell it to every working musician in the friggin' world. I would carbonate it and spike it with vodka. I could call it "Rick's Good Gig". I could make a fortune on Ebay or Home Shopping Network.

As I walked through the door at the Kirkland Lounge I couldn't help but notice that there wasn't that many people here. I wouldn't say that I was disappointed but all rock musicians (and indeed all musicians) want to be loved by many. (Jeez Rick!! Where'd ya hear that one. From your therapist?)
I suppose one could successfully argue that the rain kept people away. (Sure Rick. Let's blame it on the weather.) Anyhoo, I got to talk to a lot of good friends that I just don't see that much anymore. I also got a chance to check out "Girl on Top". These guys usually play the early set but tonight they were rockin' the late slot right before The Lyres. Apparently it was Jack Rootoo's last gig.
While standing at the bar I got a wicked Lou Miami/Cantones flashback. I could picture Kevin Glasheen's father sitting at the bar, gray hair gleaming in the florescent light. Rootoo is whipping off a fiery lead while Miami's sinewy figure lurks about the stage lit by a single 60 watt bulb.

The photographs in my mind. Is it not odd that these cranial snapshots do include some of the very same people that are here tonight? I wondered how many here tonight were not even born or were way too young to be in attendance at a Boston night club in the seventies. How many are no longer with us? I surely do not know. Probably too many. It is correct and appropriate that I reminisce so poetically on this night because I have lived for 52 years and have retained the memory of many wonderful, way cool moments in Boston Rock history. Many of which included Kathy Duff. Many of which I will surely never forget.

Why was Jeff Connolly so adamant about the official name of this gig being "Friends of Kathy Duff Gig" instead of the usual "Kathy Duff Memorial Gig" I'm not sure why. Maybe the memory of her is too painful. Hell, I don't know. I do know that he loved her very much. Enough to imprint that fact on my feeble brain. Kathy succumbed to the demons that could conceivably attack any one of you but she should not be made a 'poster child' for the human frailties that exist among us. I totally get it. RC

This episode's song is......
"Any One Of You"
Written and performed by Rick Coraccio
Click Here
home | interviews | photos | features |BGN issue list | reviews
links | contact us
Copyright © 2005 Rick Coracio. All rights reserved.