Jan. 20, 2007 12:10pm Rockaway Beach, NY.
"Can we take my car? Your tires suck!" Susan sweetly suggested and I am inclined to agree. A couple of weeks ago we were coming off the Belt Parkway onto Cross Bay Boulevard. As I powered the big Ford into a curve we went into a "controlled fishtail" on the wet road. I guess I need new tires! Hey! It's just as well. Susan's Chrysler is extremely comfortable and surely uses less gas than a full sized Ford truck. "No argument here, sweetie" I said.
We threw our stuff into her car, kissed the dog goodbye and headed off to the Big City.
Traffic was unusually light and in no time we were cruising down (or is it up?) the Merritt Parkway, satellite receiver tuned to Little Steven's Underground Garage, singing away loudly to the REAL classic oldies and contemporary rock nuggets. Ya gotta love Little Steven cuz he's really doing it! He is really saving Rock and Roll! I love his station and I listen to it constantly. It's the best 13 bucks a month I ever spent. And ya gotta love the Merritt Parkway. No trucks and clean rest areas every twenty miles.

3:55 pm Waltham, MA.
We did a mini-tour of scenic Waltham, my home town. Susan wanted to see the Waltham Library on Main St. A decent job opportunity tempts my intelligent librarian. The building was as impressive as I remember.
After a quick stop at the new Gordan's Liquor store on the corner of Main and Prospect (for medicinal purposes only) we headed off to my new favorite hotel, the Holiday Inn Express on Winter Street. It features free breakfast like virtually all European hotels. I really hope this catches on in America. It's just SO civilized. Nothing fancy, just a great selection of free stuff to eat! If you've ever traveled abroad, you know that this is always provided at any level hotel. It wasn't that long ago when I wouldn't have even considered renting a hotel room and would drive home from gigs no matter how far it was or how long it took. Last August I was attempting that feat when I scared the bejesus out of myself by waking up in the middle of a tight curve on the Hutchinson River Parkway! It is totally worth the 68 bucks to sleep in a bed instead of my car. 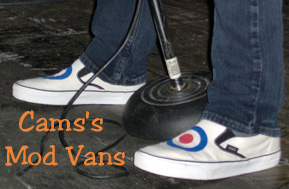 5:00 pm Picadilly Pub, Waltham, MA.
Curious about the Lyres set time, I called my buddy (and Lyres guitarist) Dan McCormack. "Yo Danny, what time are we going on?"
By the way he talked about dressing rooms, I gathered that he didn't know that our show, originally booked for the DOWNSTAIRS hall - with its' roomy, clean, large bathrooms, superior sound system, and well stocked dressing room - had been cruelly moved to the tiny, stuffy, crowded, can't-get-a-drink-at-the-bar-to-save-your-life, wait-in-a-huge-line-to-take-a-piss, no-place-to-sit-down UPSTAIRS room.
I'd just found out myself the night before when I visited Mideast.com to see who else was on the bill. Jeez! I'd been bragging to everyone like some kind of big Garage Rock Legend.
I am SO disappointed. Oh well. I'll get over it.
Everyone knows that real Rock and Roll is played mostly in bars and dives. And that is exactly what will be going on tonight. 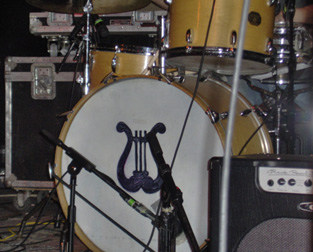 10:00ish Central Square Cambridge, MA
Whenever I play the Middle East, I like to drive down Brookline Ave. first in the hope of grabbing one of those coveted metered parking spaces close to the club. It's mostly resident parking on this particular one way street but a few rare, legal parking spaces do exist. I can't remember ever finding an empty one there and tonight was no different. We did get lucky however, when I took a right onto Mass Ave. and then took that quick left at McDonalds. In my haste, I zoomed by a possible space; luckily, it was still there on a second pass. It didn't look legal at first because it appeared to be a driveway. On closer inspection, it was only an alley, thereby making it legal enough for Rock and Roll. Susan declared it a "stealth space."
We parked there and excitedly exited the car. The street seemed so quiet. The cold, dry night air stung our faces and we both commented on how frigid it was compared to our southwestern Long Island seacoast home. When we reached Mass Ave. I inadvertently stepped off the curb. Two lanes of cars slowed to a stop even though they had the green light! (You're SO not in New York, Rick!) I remember when I first moved to New York I almost got myself killed by expecting the cars to give the pedestrian (that would be me) the right of way. HA! FAT CHANCE! It's so good to be back in The Peoples Republic of Cambridge.

Susan and I entered the club. It was like visiting an old friend. How many years have I been playing this venue? It felt GOOD. It felt like I was home. It was a great night. Susan and I enjoyed every band on the bill. The Radio Knives, The Prime Movers, and The Dogmatics. The place was packed and every band sounded awesome!
The Lyres' set was notable for its lack of drama. Yes, it is rare, but every once in a great while we pull off a set sans fireworks.

I miss Boston. I love talking to all the Boston scenesters. It all feels so familiar. To recognize people you don't really know. To know that you could run into someone that you haven't seen in years. To see old friends.
I have a history here. Good or bad, this is my town. I am comfortable here. I know how to get around here. I can navigate these cowpaths and I have literally spent a lifetime demystifying the veneers of life here in Boston.

That is why, dear reader, I am moving back. RDC

This episode's song is......
"Waiting For You" from The Last Ones
Written and performed by Rick Coraccio
Click Here
home | interviews | photos | features |BGN issue list | reviews
links | contact us
Copyright © 2006 Rick Coracio. All rights reserved.