April 21 2006 Rt. 195 Fairhaven Ma, 3:45 pm
It is a beautiful sunny day, a little chilly for late April but the cab of my beat up old Ford F250 pickup truck is warm and comfy. While cruising eastbound on 195 towards the Cape and home I had one of those nagging feelings like I was forgetting something important. 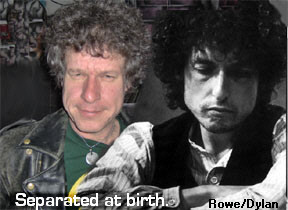 Recently, my life is been in an upheaval of sorts and minor details (my name, my address) are escaping me more than usual. Suddenly it hit me. I think I got a gig tomorrow. I had better call someone and find out. "Hey Danny, How's it goin'? Do we have a gig tomorrow?" I asked "Oh yeah" he said. "At Ralph's with the Classic Ruins and Bob Mackenzie's new band." "Ralph's huh?" I grunted. "That means it's gonna rain" (It always rains when the Lyres play at Ralph's.)
"Hey Rick," Danny's tone got surprisingly serious. "Got some bad news. Lynn Ciulla passed away." "Aw geez" I said. "What happened? How? Why?"
I suddenly choked up as a flood of memories enveloped my brain. It was the late seventies. My band DMZ was just starting to get some national attention. Lynn Ciulla and DMZ guitarist JJ Rassler had an apartment on Freeman street in Framingham. They were a really nice couple and I visited them often. When I needed a place to stay, they offered me their spare room. I moved in and stayed several months. I got to know Lynn (and JJ) very well.
They were Fred and Ethyl and my girlfriend (Joanie Brocklebank) and I were Lucy and Ricky. (remember J.J.?)
Lynn was always gracious and generous. She had a wonderful sense of humor and laughter filled her home.
I remember many mornings sitting at the kitchen table drinking coffee and making funny comments about the neighbors as we looked down on them from the second floor window.
I remember her sitting in front of the mirror for an hour putting her "face" on before work.
I remember her gold Plymouth Duster and her green Ford with no heat. One morning when the green Ford refused to start, the brash brunette had no problem with thumbing to work. Later that night, we all laughed at her account of the adventure. "The first Camaro that went by came to a screeching halt." she said with that high cheekboned smile of hers.
At this very moment, I'm sitting on a folding stepstool that belonged to her. She had thrown it out when it cracked in half but I rescued it from the trash and glued it together with Elmer's glue and have kept it ever since. I'm going to have to enshrine it now alongside Kathy Duff's bicycle.
Lynn was so cool. Such a wonderful person. I can't believe that she is gone.

Sat. April 22, 9:21 pm Sagamore bridge
"Rick, maybe we should stop for coffee." my girlfriend Susan sweetly suggested. I was already struggling to stay awake but I didn't think it showed. "Yeah, okay honey. There's a place at the rotary." I said and pointed the bow of her Chrysler to starboard and into the parking lot.
( Geez Rick you old fart! Nothing impresses the ladies like falling asleep at nine o'clock.)
It was SOOO past my bedtime. 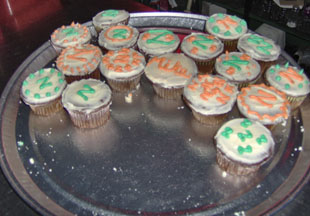 Hey! What is this? There is no lake-sized puddle in front of the load-in door. It looks like it was filled in with some kind of stone. That puddle has been there since the mid-seventies. I barely recognized the place.
Being a creature of habit, I attempted to load my amp in the front door as usual. The door dude wouldn't let me at first. "Ya gotta load in out back" he said twice. I had already parked the car and rolled the heavy amp across the lot. I'm so glad he finally relented because it would have been a real pain in the ass to comply. I later found out that I was the only one allowed to load in the front door.
When we finally got upstairs to the band room, the Classic Ruins were on stage and doing their last song. I stowed my stuff and hit the bar running. I ordered a Black Russian for myself and a screwdriver for my honey, Susan. The bar was strewn with party hats and a large tray of festively frosted cupcakes were right in front. "It's my birthday," the young barkeep offered, "Help yourself to a cupcake."

11:35 pm
It's a wicked good crowd. The usual suspects are in attendance plus many new faces. It's hard to miss Captain PJ in full puppet regalia. I used to know the names of all his puppet friends but now I can't think of even one. I was surprised to see the ex-Downbeat 5 drummer setting up. His band, the Radio Knives, looked promising because of the equipment they were bringing onstage. The bass rig was an Airline bass guitar and a blue sparkle Kustom amp, on top of which sat a suitcase with the band name in large, stick-on letters. Very vaudevillian!
The guitarist had a Orange combo amp which I have never seen before and an unusual guitar, sort of a modified coffin shape. Everyone was talking about it. Nobody knew what it was. Later we found out that it was a Hallmark Sweptwing. I love this kind of stuff! They sounded pretty good and played with a lot of unpretentious spirit.

12:35 am
We set up our stuff and were just kinda hanging around waiting for the usual unintelligible Captain PJ introduction but instead he did a touching eulogy for Lynn Ciulla.
It never occurred to me that the news of Lynn's passing hadn't yet reached Jeff Conolly's ears. Could it be that Jeff has just at this very moment heard the sad news for the first time? The stunned, ashen look on his face said it all.
The poor guy was visibly shaken. "Are you okay, Jeff?" I asked. "Well, I've been better" was his curt answer. "I did NOT know about Lynn." he continued, "Way to cheer up the crowd!" "Sorry man, I thought you knew." What else could I say?
The whole set seemed pretty damn good despite the ominous beginning.
I have a theory: the better Jeff can hear himself, the better the set is and the six big monitors in front guaranteed that he would be hearing himself. I saw heads bobbing, girls dancing, puppets flying and everybody having a good time.
That's what this rock and roll thing is all about, isn't it?
To get out and forget about the daily grind for awhile. To meet up with friends and have fun while we're still here on the planet. We are so fortunate to have this in our lives.
So many great local clubs, awesome bands and wonderful people. So little time.
Rest in peace, dear Lynn. We all enjoyed you so much while you were with us. RC
This episode's song is......
"Wherever You Are"
Written and performed by Rick Coraccio
Click Here
home | interviews | photos | features |BGN issue list | reviews
links | contact us
Copyright © 2006 Rick Coracio. All rights reserved.