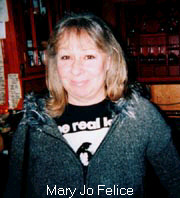 " Are my boobs too big?" ( Jeeeeez !. What a question too ask a guy! I considered my options very carefully.) " No gorgeous, they look just fine." was my honest reply. "Hey! Isn't that a brand new Real Kids tee shirt your wearing ? I said as I massaged the black cotton fabric between my thumb and forefinger, as if it were an expensive hand tailored suit. "Ya, I got a bunch of them." the Felice sibling, Mary Jo, loudly and proudly exclaimed. "How do I look?" (Jeeez! I have heard this question before, a very deep and far fetching inquiry, one that has ruined many a night out. A query so innocent and yet so petrifying, the whole night seems to hang on my very response.) " Way cute." Another honest reply. (hey, I kinda like this honesty thing)

8:45 pm
It's time to head out to the big city. We hopped into the car and as usual I take mental inventory before I back the car out the driveway; one 1963 Epiphone Rivoli bass guitar, one Fender Studio Bass amplifier, Two mic stands (one boom and one straight), one microphone with cord, tuner, cell phone, etc. 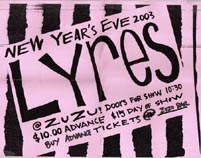 ˜Mental inventory™ is my friend, A friend who has saved me many dollars and sleepless nights. I taught myself the technique while working with my good friend, and LYRES guitarist, Jack Hickey. One night years ago Jack left his Fender Twin Reverb amp at CBGB's in New York City. He was completely oblivious to this fact the whole way home and even well into the next day. I got a call at work about 3:00 in the afternoon. "Hey Corockanroll!" "What's up Jack?" I replied. "I think I left my amp at CBGB's." he lamented. "Well, what do ya mean YOU THINK?" I asked somewhat incredulously. "Do you have your amp or not?" I added. "Well, NO, I don't have it." he answered in a characteristically calm Hickeyesque manner.
To make a long story short, I suggested that he call the other band on the bill and ask them if they knew anything (which he did) and miraculously they actually had his amp. Unfortunately, they were from Long Island, 400 miles away. Their honesty and willingness to help reunite amp with owner was nothing less than inspirational. The amp was too heavy for UPS and FEDEX. We finally decided to get it on a train to north station as freight (a thirty dollar trip and a happy ending). 10:15 pm Central Square, Cambridge MA.
Traffic was surprisingly light for a New Years Eve. As we entered the square from Main Street I could see that parking was gonna be somewhat of a problem. On a whim, I took a right turn at Mc Donald's directly in front of the venue. I hadn't gone ten feet when suddenly back up lights appeared in front of us. "Hey! That guy is leaving!" exclaimed Mary Jo. Fortuitous indeed I thought. A parking spot less than 20 yards from the front door of ZUZU. This of course is MAJOR!! It means that I can simply roll my bass amp across Mass Ave and into the club. Yes, the "Parking Fairy" was indeed smiling down on our Toyota. 10:30ish Central Sq. Cambridge MA Club ZUZU 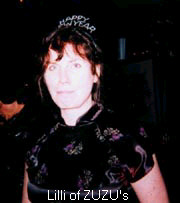 We entered the club and were immediately offered colorful feathered masks. Club owner Lilli was smiling and chatting with the patrons as she walked around passing out assorted noisemakers and hats. The bartender was very busy and very happy. I was here only once before and had forgotten how tiny this wonderful place is. My first BGN journal entry was from here. Singer Eric Martin moved me (and everyone else) to tears with his rendition of Tupelo Honey.    Fifty persons is all the law will allow here. It's not unlike having a party in your living room. This place is about the size of a typical living room. By the end of the night I'm sure we will know everybody here. I met a couple from Oregon, Michael Day and Pollyanne, nice people. They were visiting relatives nearby in Rhode Island, picked up a newspaper to find something to do, and lo and behold, their favorite band (The Lyres) were playing a mere hour away. They told me they had many friends who will be green with envy when they find out. A super compliment! Thank you guys.    The Worcester contingent is well represented by my good friends and fellow musicians Artie Sneiderman, his lovely wife, Patty (the prettiest face in rock and roll) Sneiderman, Mike Michaud, his lovely wife and a few of their buddies . These guys are occupying a table right in front of the bandstand. They are having appetizers, dinner, desert and drinks and basically just 'doing it up'. Directly behind them rock novelist Brett Milano and friends are whooping it up. Brett is looking wonderfully goofy and festive in his top hat. His girlfriend is just as tall as he is. I am waiting for the ceiling fan to knock their top hats off their heads. 11:25 pm or so
Danny McCormack picked up his guitar and quietly started picking out the chords to "Swing Shift", a song we have not played since the Eighty's. I will at this time confess to you, dear reader, that this present line up of The Lyres (referred to as the "On Fyre" lineup) has yet to rehearse as a band. This is our fifth gig!!    Paul Murphy, huge goblet of red wine in hand, squeezed his thin frame behind the drum kit, settled in and picked up the beat, softly at first. I threw the strap of my trusty Epiphone over my shoulder and after tuning looked at Danny's hand in an effort to find the key. After a few measures I had the 12 bar progression down and it felt pretty damn good!
An impromptu rehearsal for sure. I wrongly assumed that we would include this tune later in the set. When I turned around to face the audience the whole friggin' joint was dancing up a storm!!! I mean it was absolutely NUTS!! Even Jeff was impressed and psyched. Resplendent in his blue sparkle tux and two bottles of bubbly. It was just so beautiful when he flipped on his Vox Continental and elevated the MOOD to full out, balls to the wall, BASH status.    Through the partially curtained front window behind Murphy I could see several people dancing on the sidewalk. Passers-by getting sucked into Paul's hypnotic beat with pulsing organ masterfully and gleefully improvised by Mister Jeffery Conolly.    Mr. Airplane woman, Tara, dressed very smartly in a bright red outfit, danced through the front door and never stopped all night. My honey Mary Jo, with a huge smile on her sweet face is doing that girly shoulder shake dance that only girls can do. A couple from Nantucket are doing this crouching dance thing. The guy has on this amazing mask that is like a huge tangled mass of snakes, like Medusa. I will never forget this moment. 11:59pm Five, four, three,two, one! HAPPY NEW YEAR!!!

Noisemakers are grinding away, horns are tooting loudly, everyone is so happy and so 'in the moment'. I turned around to take a large gulp of my drink and yuuuuckkkk!!!! Coca Cola !!! I had forgotten about my vow not to drink tonight. (Yes, it is true) I, Mr. Black Russian himself, had decided not to drink tonight because I was determined not to be one of those poor unfortunate souls on the side of the road doing 'The Dance' in front of blue flashing lights and too poor to afford the hotel room I had previously reserved. It was a good decision, which I definitely do not regret, but wouldn't ya know it, the bartender didn't know how to make a Black Russian! I love that! I ordered one for my girlfriend. "It's so easy." I explained, "first, take a LARGE glass, Half Absolute and Half Kahlua."    Mary Jo ran up to me to give me a big New Years Eve make out as Jeff directed Dan to start off "Loving Cup"( a song that is literally impossible NOT to dance to.) I'm so glad that everyone is having a good time and Jeff is behaving himself very well (at times, I swear, he is downright charming).    There is a guy here, I don't know his name and I have never seen him before. Every time I walked by him he grabbed me in a big clutching bear hug. He spoke with a foreign accent and he had wicked salami breath (salami or Iguana, I'm not quite sure) He seemed harmless enough but it was all I could do to wrench myself out of his grip. A woman at the bar asked me if I could get this guy to leave her alone. What the hell, I'll give it a try! I walked up to him and as soon as I got within four feet he reached out with both arms and pulled me six inches from his face(definitely violating my personal space). Through trial and error I figured out that if I yell loudly into his ear, "OK THAT'S ENOUGH" he lets go. Just a big happy drunk guy loose in America on New Years Eve, chasing every girl in sight and getting absolutely nowhere. We've all been there. 1:20 am Jan 1 2004 Mass Ave, Cambridge, MA in front of ZUZU

I do miss smoking in bars but having a smoke in front of a bar is becoming a real happening. I met more people in front of the bar than I did inside. They should serve drinks! Sooner or later some enterprising businessman will figure out a way to capitalize on this phenomenon.    Ex- Lyres guitarist, Jarred, appeared out of the crowd. "Hey Jarred, I thought you moved to L.A?" said I. "Rick! How's it goin'?" he smiled back as he reached into his coat and pulled a bent filter cigarette from a soft pack. "I am so good." I replied as I lit his smoke and snapped my lighter shut with an audible click. "Good to see ya man." I added. "I miss playing with you guys." he admitted. "We had some really great gigs." I agreed. Naturally he was with a wicked cute young girl. They walked into the bar. Through the front door I could see him hugging Jeff. It's New Years Eve and all is forgiven. 1:40 ZUZU bar time     Most of the partiers have gone. The salami breath guy is still here and managed to grab both me and Mary Jo at the same time, one in each arm. O.K I know the drill and it works every time. Jo and I ran to the back of the club. Club owner Lilli looked at me somewhat apprehensively and said "There is only twenty minutes to load out!" I guess it's time to go I thought to myself. 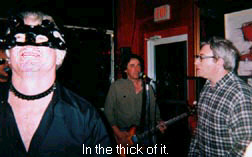 Out on the street here on famous Mass Ave. it was such a nice New Years Eve scene. The stars are blinking and it is warm for a New England January night. Couples are walking by hand in hand and smiling, everyone is smiling and happy! Cabs are being hailed. A truck driver blasts his horn loudly at the sight of three or four attractive young girls in short skirts waving madly at him. The sidewalk is bustling with partygoers, each with their own agendas and stories and memories of New Years Eve 2004, in this wonderful New England city. RC
home | interviews | photos | features |BGN issue list | reviews
links | contact us
Copyright © 2003 Rick Corracio. All rights reserved.