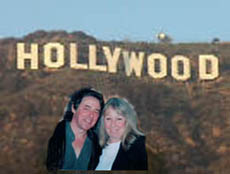 The long and gleaming Lincoln Continental, painted an understated silver, glided silently into position. A doorman in a black tuxedo swung the rear door wide open. Pale gray velour interior gave way to deep red carpet crowded with photographers and production technicians. They are busy with their related equipment and descending on Hollywood luminaries and major recording stars. I'm so glad I got my cowboy boots back from the cobbler; however there is nothing more slippery than new half soles on carpet. I will have to be careful.
Hopping out, I struck an exaggerated gentlemanlike pose and extended my elbow to assist my girlfriend Mary Jo out of the limo. Her black velvet high-heeled shoe gingerly tested the rich red pile as if it were an apparition.

A clean cut young man wearing a headset and a walkie talkie approached us before we even moved two steps. "Joan Rivers will interview you now Mr. Coraccio. Right this way please." he said with a tenor voice that was just a little too clipped to be called a real California accent. "Right over here, please Mr. Coraccio, just a few moments if you will, please. Thank you Mr. Coraccio." We waited behind umbrella lights and racks of equipment stenciled with the familiar "E" logo.
Just a few feet away, Joan and Melissa were conducting an interview with Steve Tyler and Joe Perry of Aerosmith. Blues legend BB King stepped in between them and an animated conversation ensued. Tough act to follow I thought to myself.

"Thirty seconds Mr. Coraccio. On my cue you will approach Ms Rivers and stand on the X if you please Mr. Coraccio." Mary Jo gently squeezed my sweating hands, her big brown eyes looked up at me. "You'll be fine. Just be yourself." she said in mellow, calming voice.
The walkie talkie guy did a three second countdown with his hands and pointed to the big X taped to the floor. Joan did a short improvised intro into the camera as I walked out into the lights. Her hand (with that enormous diamond ring) touched me on the lapel, "You look wonderful Rick. Whose clothes are you wearing?" "Armani. You look great too." I said. "And who is this? Come over here dear." she said as she pulled Mary Jo out from behind me. "This is Miss Mary Jo Felice." I said and stepped aside. "Oh! Your gown is just to die for! Who's is it?" Joan said stepping back, both hands on her face. "Christian Dior, and the shoes are Versace." Jo said and did a half turn to show off the back, or lack of back. "You look absolutely stunning my dear.
Now Rick, you've been nominated in two categories; Best Male Pop Vocal Performance and Best Pop Song for your runaway hit "The Lottery of Love" AND your are involved with band that I understand is eligible this year for induction into the Rock and Roll Hall of Fame." "That's right Joan, I play bass for The Lyres and our first single "Don't Give It Up Now" was released twenty five years ago." She put her bejeweled hand on my shoulder and gave it a gentle shake.

A hand on my shoulder is gently shaking me into consciousness. A big blue Lazy Boy recliner supports me. A brownish gray tiger striped cat is curled up on my lap purring softly. The logs in the fireplace are charred and glowing red. I rub the sleep from my eyes and think 'Jeez! I didn't even get to give my acceptance speech!' ("I want to thank all the little people/ You like me. You really like me!") "Sweetie, we should get going. We still have to pick up Maria." Jo said from behind me, her hand still resting on my shoulder. "Aw hell, Jo! Another year has gone by and still no Grammy. Not even a nomination. I even have a great spot all picked out for it on the mantle, right next to my Cub Scout Pinewood Derby trophy!" I joked as I pointed toward the mantle. She hugged my neck and said, "I'll nominate you baby."

As expected, Central Square is bustling with people and cars. "Hey Jo. I hope you brought the Parking Fairy with you tonight, there's like a thousand cars circling for a landing." I turn down Bishop Allen Drive and hang a left before the Municipal Parking Lot and spot a big fat juicy metered parking space on the right. Amazingly the nine cars in front of me just passed right by it! Probably thought it was too good to be true!
I roll my bass amp a full two blocks to the club and can't help but notice that it is about twenty degrees colder here than it is on Cape Cod. I say 'excuse me' a hundred times as I push my amp through the lounge, the dolls right behind me.
The Coffin Lids were just starting their last song as we entered. (Damn! I really wanted to see these guys) WOW! It's wicked crowded. I stashed my stuff and the three of us hit the bar. It's tough getting a drink here tonight but we patiently waited our turn and Maria bought the first round: Black Russian, Captain Morgan and Sprite and a Vodka Collins.

The Real Kids are on the stage setting up their equipment. Spirits are high. It's a full house. John Felice said a few touching words about how nice it is to be playing with the Lyres, and how it happens maybe three times a decade and that our bands have many of the same friends. John 'broke in' his brand spankin' new Telecaster with "Up is Up". The sound mix is excellent. (Thank you Mr. Sound Man whoever you are)
The Real Kids are kicking ass onstage and the audience is responding by dancing and shaking about. An unknown dark haired cutie is pawing John's legs as he whips out another one of his patented, couplet style leads. Guitarists must love that. John is actually smiling, I'm not so sure his girlfriend Annie appreciated it.
My good friend Richie Johnson has just entered the club accompanied by his cute girlfriend, Jeannie, "Kayak Girl" Plugis. So named because last summer, instead of your typical "dinner and a movie" date, he took her on kayaking dates. Not in one of those little one person kayaks that we all see gliding through serene inland waterways. Richie has this huge two-person ocean kayak that he would strap to the roof of his truck. They would go to places like Portsmouth NH, where the current gets quite turbulent. Wetsuits and PFD's are definitely the required apparel. All summer long Jo and I were moved by the developing love story.

The owner, Joseph, put a sign on the door. The club is officially sold out. It is tough to do any serious drinking tonight because the tiny bar is wicked crowded and the bathrooms really suck. I really don't understand why they removed the locks. One of the two disgusting toilets has backed up all over the floor.
The Real Kids are finishing up their rockin' set with 'Do the Boob', 'Who Needs You' and 'All Kindsa Girls'. B-Face starts to remove his bass rig from the stage. "Just leave it there Chris, I'll set up in front of you." I said as I rolled my Fender into its customary position next to Murphy's crash cymbal. Jeff is setting up his best Vox Continental organ. Danny is tuning up (stage right). I can't believe that I forgot my tuner, "Danny, gimme an A!" I shouted across the stage. (Wow, still in tune from the last gig.) These are the very same strings that were on this bass when I bought it at McDuffs in 1989(they're just about broken in.) I do carry spare strings but I have only broken one in my lifetime, many, many years ago when I was playing with John Felice, Mr. Curt and drummer Kevin Glasheen in a band called The Kids.

We are just about ready to start the set. I am waiting in line to take a leak. The long, fluffy blonde hair of Kathy Duff is pushing it's way across the crowded room toward me. "Rick, can you get me in?" she breathed. "Kathy! I think you ARE in!" We both laughed. "Yeah. Smartass, The door guy needs someone from the band to put me on the list." "OK, sure, let's go." I said and followed her back across the room to the entrance.
The audience parted for her long confident strides. Her Royal Blondeness doth desire passage! "Can you get two in? I'm with Chris." she said, whipping her hair around as she turned her head towards me. A fragrant shampoo scent found it's way to my nostrils. "I dunno. Let's go find out." I replied. She stiff armed the door and it flew open to reveal the startled door guy sitting on a stool. "I need to get these two guys in." I said. (trying to sound assertive). "Nope, only got one guest slot open." he said.(Jeez Rick, you used to have more pull in this town) "OK. Well, then let her in and the guy can pay." Mr. Door Guy nodded in agreement.
"Thanks Rick!" Kathy said and gave me a hug. I could feel her frail shoulder in my left hand and her lower vertebrae in my right hand. The customary red lipstick was deposited on my cheek. "No problem sweetie, glad ya could make it." 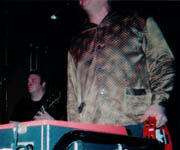 I love starting the set with 'How Do You Know'. It just feels good to start with a fast labor intensive song like that to get rid of all the anxiety. In my humble opinion the set is going very well. I am receiving an excellent sound on stage. Jeff is looking directly at me and giving me a clue for the next song. "DO DO DO DO DOOOO" which translates to: 'Enough of What I Need' (one of my favorite songs) but apparently Danny doesn't know it and shrugs his shoulders. "I've never played this song!" he pleaded his case. I am not surprised that Jeff is undeterred. He is huddling up with Danny and within 40 seconds he taught him the whole friggin' song! It sounded pretty good to me! We played every song we know except 'I Got No Reason to Complain' and walked off the stage. Later as I was collecting my pay, Jeff said "How come Murphy didn't start that song? I was waiting for the drumbeat."

The lights are on and everyone is filtering out. Band guys are breaking down the equipment and getting ready to load out. Friends and girlfriends of the band guys are all hanging around chatting.
A guy from southern Florida handed me the new DMZ CD to autograph. "I came all the way from Florida just for this gig." he said. I shouldered my guitar and rolled my amp toward the door while saying goodbye to whomever would listen. "Honey, I'll carry that guitar." Mary Jo said and the three of us, Jo, Maria, and myself, hit the street.
The brisk night air enlivened us. Mass Ave is loaded with people heading home. All around us laughter and lively conversations lighten our mood as we walk to the car and talk about the night's experiences.

Tomorrow (somewhere in Hollywood, California) guys like Beyonce, Justin Timberlake, and Christine Aguilera will most likely be awarded the highest honor any American musician can hope to achieve.

Tonight, however, on a clear, cold, starlit evening in Cambridge, Massachusetts, three bands played their hearts out, for very little money, and the honor of playing the music we love: Boston Rock and Roll. -RC