Past Journal Entries ...Click Here
The Lyres Chronicles
The story of a Lyre Retyre 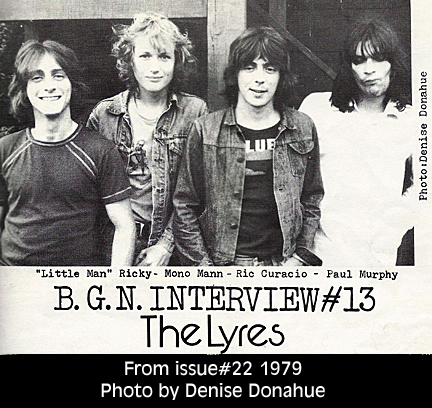 I was wondering how long it would take before someone other than my wife would notice I was no longer a member of the Lyres, a band I have been part of since the late 1970's. That question was answered this evening when I read an email from the editor of Boston Groupie News, Miss Lyn. She wrote, "Rick, I saw the Lyres last night...it was not the same...very different." The egotistical side of me really wanted to read something like, "Rick, I saw the Lyres last night and they really sucked without your brilliant bass playing. How dare they think they can carry on without you?" In reality the new guy is an upgrade! I speak through experience having played with Dave Sczepaniak for a couple of years in a band called the Shambles. Not only does he play bass and sing better than me, he's also younger and much better looking. 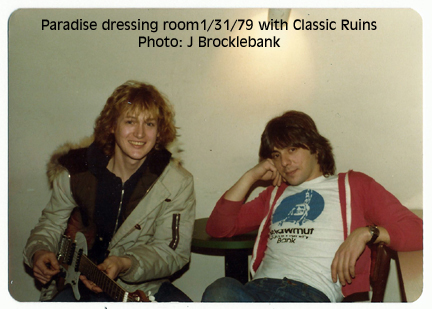 My last gig as a Lyre had been at the Rosebud on May 19, 2012. At the time, I didn't know it was going to be my last gig, not that it would've made any difference in my performance. (I thought I played well that night.) It was fortunate that it turned out that way because I do tend to get sentimental, tearing up at the drop of a hat, worse than Speaker of the House John Boehner. I had actually planned to Lyre-retyre on my 60th birthday in July, but there wasn't another gig after the Rosebud, so I quietly stepped off the train and let it roll on down the track without me. My replacement was a phone call away, and that's the way it's always been. No one member is more important than the band.

Thinking back, I can't for the life of me remember my first gig as a Lyre thirty plus years ago, so I hit the ol' archives and dig out my 1978 Star Wars calendar. In November I had blocked off four days for the Rat: DMZ and Nervous Eaters on the 16th and 17th, and DMZ and LaPeste on the 18th and 19th; it was common in those day to play multiple nights at any given club. There were no other entries the rest of 1978, so I'm reasonably sure those were the last DMZ gigs.

Next, I pull out my 1979 calendar, flip to January, and there it is noted in my girlfriend's super neat handwriting: January 17, 1979, Lyres, the Rat, WTBS benefit. "Benefit for what?" I wonder. I dig further and find the Rat ad in the January 16th edition of the Boston Phoenix. It reads, "WTBS benefit with Willy Loco Alexander, Neighborhoods, Thrills, Lyres, Unnatural Axe." No other information is given. Was that the first Lyres gig? I think so! Jeez! I had thought it was soooo long between the demise of DMZ and the start of the Lyres, like I was hanging around FOREVER doing nothing, but the proof is right in front of me. It was 59 days.

After DMZ petered out, the battle lines were drawn between its two leaders, J.J. Rasler and Jeff Conolly. At the time I was renting a house with J.J., so by Conolly's criteria, I was living in the enemy camp. A lot must have happened in those 59 days. I wish I could remember more. I only know that when I finally crossed enemy lines the Lyres were Ricky "Little Man" Carmel on guitar, Paul Murphy on drums, me on bass, and of course, Jeff Conolly on everything else. I think that my old friend Murph got me in, returning the favor because I got him into DMZ, but as I said, I really can't remember exactly.

The last half of January 1979 was busy for the Lyres. We played the Rat twice and the Paradise twice and Cantones three times, all in fifteen days. Looking at the rest of 1979, I'm amazed at how much we played out: in March alone we played 16 gigs! With the drinking age still at 18, crowds of thirsty college kids filled the clubs and the Boston music scene soared. There were so many clubs and so many patrons, a band could even play on a Wednesday night and get a decent crowd. I preferred seeing my favorite bands on weeknights because it was less crowded than the wild weekends. 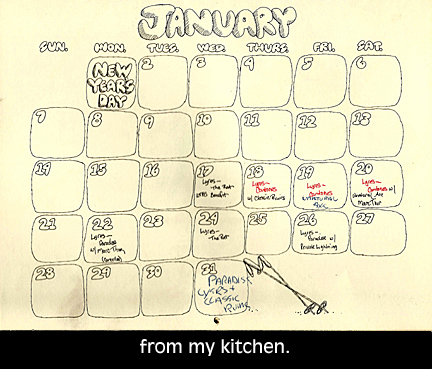 I'm reconstructing this timeline of the early Lyres from my imperfect memory and boxes of yellowed newsprint, faded photos, posters, flyers and artifacts. Don't kill me if I get some details wrong. Had I known I would be writing about this stuff so many years down the road, I would have paid more attention, or taken better notes.

I had no idea the band would last so long, let alone become part of my identity. It was long ride! And there were bumps in the road, like the time Jeff fired the whole band and moved to California, or the time I left to raise my young family, or the time when Paul left so that he could keep a steady job and get a mortgage. Guitarists Danny MacCormack and Steve Aquino rotated through, each doing two tours of duty. Sometimes life got in the way, but despite the snags, we ended up together. I watched these guys grow from teenagers to men. I saw jobs come and go, apartments and houses come and go, relationships come and go as well. I have yet to have anything in my life last as long as my time with the Lyres. Except of course, my actual life. 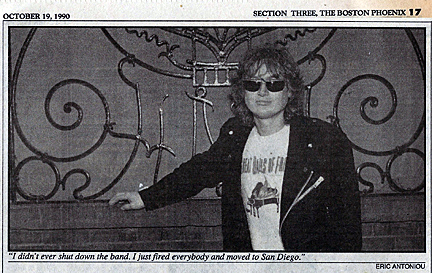 "Are you sad?" my wife asks from the other end of the couch where she sits as I write this. The question takes me by surprise. Maybe she sees the corners of my mouth turn down or my eyebrows peak above my nose as they do when I get emotional. I hesitate. "Jeez, Rick," I think. "Answer the question, will ya? It's a very simple question." She is still looking my way, cute face tilted, waiting. "No. I don't think so," I finally answer. It's a bold-faced lie, but she doesn't call me on it. "Sentimental?" she suggests, coming to my rescue, because God forbid, a guy should show some emotion. She's good like that. "Yes hon, sentimental," I answer. No further explanation is needed. It's just not possible to end a major part of your life without taking on some kind of emotional baggage. After so many years, so many miles, and so many tears, I'm dragging a freakin' steamer trunk. 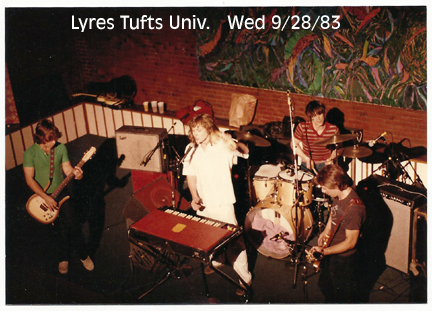 With toast and coffee, I sit down at the kitchen table and continue writing. Realizing I need to check the spelling of Dave's last name, I reach back and grab the Shambles CD from the shelf I have reserved exclusively for recordings I play on. Opening the jewel case, I find what I am looking for on a March 1987 promo photo by Deb Beaudry. "Sczepaniak, yup that's it, a real tongue twister," I say to myself. 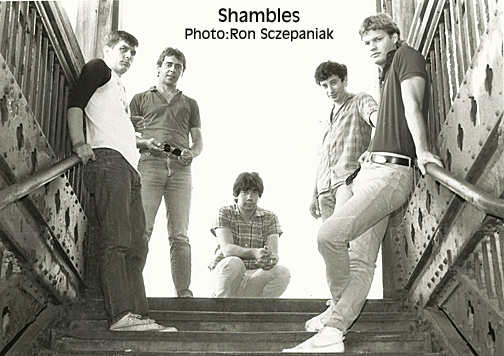 Suddenly I am distracted by my own image. Whoa! Look at me! The handsome young man with a trim figure and tousled dark hair stares back at me defiantly, Ray-Ban aviators dangling from his hand. Wow! We all look like children! With a wistful sigh, I place the CD back in its proper place next to dozens of Lyres, DMZ, Boize and Last Ones recordings. My whole musical life is tucked neatly into one shelf. Wow!

Does this stack of plastic measure my success? Well... not financially. Even though the Lyres played lots of decent gigs and I got paid for them, it was never enough to live on, most times not even enough to cover gas and my bar bill; I always had to have a job to make ends meet. My rewards had nothing to do with money.

What rewards you ask? What the heck did I get out of it? A Grammy award? Groupies? So what was it then? What does it mean to have been a Lyre? Hey, I like a good existential quandary as much as the next guy, but the answer to that question is probably not as entertaining as "What was it really like to be in the Lyres?"

End of part one 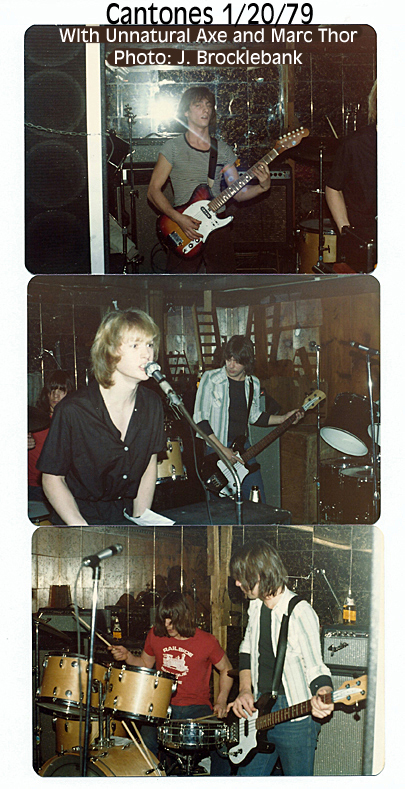