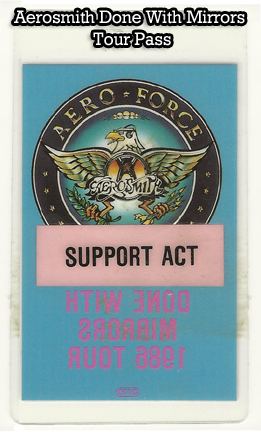 I often wonder how much different things would have been if the Lyres had been more commercially successful. In a dressing room one night, R.E.M. guitarist Peter Buck told me they toured all around in a little van and stayed at budget motels much like we did. They only knew they had a hit record when the hotels got fancier, Hilton and Marriott instead of Red Roof Inn. Still, business as usual, until their second big hit, then it was stretch limos, tour buses, and concert halls. I got the feeling he missed playing small clubs and bars. I guess I would too; I'll never know for sure. And even though commercial success eluded us, every once in a while we played something huge.

I recall opening for Aerosmith at the Centrum in Worcester, MA. We drove our little red van deep into the bowels of the stadium and parked in the vast indoor lot underneath. I saw Aerosmith's four tractor trailers and five luxury tour buses lined up and still enough room left over to play a game of baseball. Our tiny Dodge looked so puny among these Goliaths as the Centrum staff unloaded our gear. I thought I had a taste of rock stardom, until... 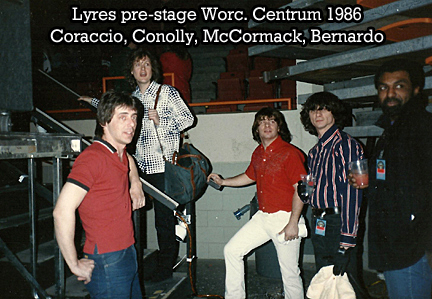 "You're gonna hafta move your truck," said the roadie with a clipboard.
"What! This is a joke right?"
"Nuh uh, man. You can't park here."
"Not enough room huh?" I spread my arms expansively. Mister Clipboard was unmoved.

Ten minutes later I was feeding quarters into a parking meter two blocks away. The marginalization of the Lyres continued when they posted a guard at our dressing room door to lock us in whenever Steven Tyler walked by, lest we gaze upon his countenance and soil his mood!

The union roadies set up our equipment in a tight little five foot knot center stage in front of and below Aerosmith's drums. We were microscopic on the huge stage. Amoebas in a Petri dish. Ants on Aerosmith's massive picnic blanket and they were trying like hell to ignore us.

Monitors? HA! Insects don't need no stinking monitors. Just play your stupid little songs on your toy drums and dinky amps and get hell outta the way so the big boys can show you how it's done. 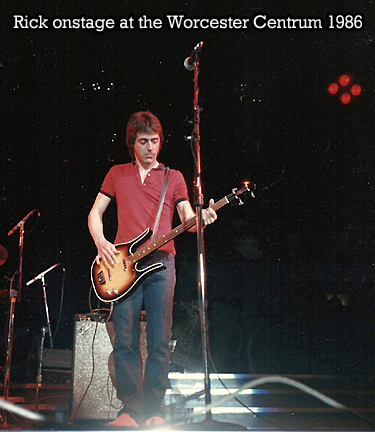 From where I stood the sound was horrible. The only thing I could hear clearly was Johnny Bernardo's snare echoing off the back wall two seconds after he hit it, making it impossible to keep time. I went into auto-pilot, relying on muscle memory, plowing through the mush and the buzz, and trying to look like I knew what I was doing. Overall, I'd rate the experience a D+.

Up to that point, the Lyres didn't have a lot of concert hall experience. Hey, I didn't expect rainbows and hugs and Jaegermeister shots with Steven and Joe, but jeez! It was like they sent out a memo, "Pay no attention to these little men." I'd rather gig a rockin' dive in front of a couple dozen people any day of the week! We only played a few shows of that magnitude but we practiced like we did it all the time.

Did you know Lyres music was completely orchestrated?

Oh ya! No Lyre ever played what he wanted. Every note was played the way Jeff wanted it. Every single bass drum, snare drum, tom-tom hit, every cymbal smash and hi-hat tap: orchestrated and practiced over and over to Jeff's satisfaction. 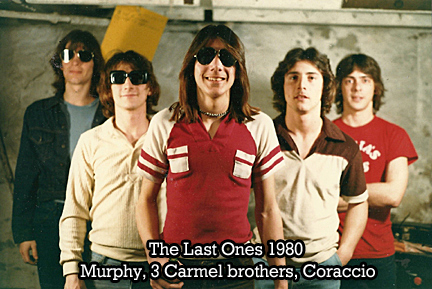 Rehearsals numbed the body and mind. We would practice every detail repeatedly, ad nauseam, often spending multiple rehearsals on just one measure of one song. Imagine going to rehearsal for a month and working on a single song, one in some weird key like F-sharp. Now imagine standing there for an hour listening to Jeff try to teach an experienced guitarist exactly how to play three notes in a row.

The drummer also had to endure lessons in technique!

"More on the bell, close the hi-hat more. TIGHTER! Double crash once on the last verse, two hits on the bass drum, the first one soft, ba-BOOMP ba-BOOMP ba-BOOMP gimme a heartbeat, drag the beat like Charlie Watts, PICK IT UP! Las Vegas ending! Okay. From the top. One- two..."

I've never had a strong memory so this rote perfectionism was especially difficult for me. Not only would I forget tiny parts that I learned the night before, I'd forget whole songs I'd played for decades. I did my best to make up for it and my cheat notes were legendary. Still, it probably drove Jeff nuts.

Nobody likes being told exactly what to play and how to play it. It's demeaning and some would argue it's anti-Rock and Roll. I saw mild mannered Steve Aquino get so frustrated he threw his brand new, very expensive, longhorn guitar across the room. It sailed over Jeff's head and smashed into a cement wall. We were stunned! "Rehearsal's over," someone said and we all quietly left. 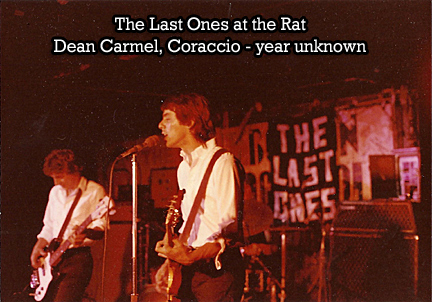 Ya, rehearsals really sucked-- gave me nightmares or bored me to tears-- but you can't argue with the results. Lyres shows speak for themselves. No embellishment needed, no hype. They always work. I don't ever remember playing a gig that didn't get a good response from the audience, and that's MY reward, Dear Reader. I don't believe for one second, however, that it has anything to do with me. It is, was, and always will be the Jeff Conolly show. He is the driving force, the genius, the master, the maestro with perfect pitch and Memorex memory. I was merely one of many supporting players allowed to share in the celebration.

Being a Lyre is not for everyone. I know more than a few musicians who wouldn't do it for more than ten minutes. I started my own side band, The Last Ones, just to have some musical freedom. Murphy and Carmel joined me for exactly that reason. We started playing gigs in December of 1979 and continued off and on for the duration.

I'm sitting at the bar with my friend Tim Downey, two pints of cold and delicious IPA drafts before us. Tim's a Boston music guy, so naturally the conversation wriggled its way to the Lyres, and inevitably, to Jeff's reputation for being an ogre.

"How'd you put up with him for so long?" Tim asks. The question seems rhetorical but I decide to answer, more for myself, just to hear the words out loud.

"I'm an easy going guy," I say. Tim seems disappointed, like he wanted to hear, "Booze! And drugs! Lots and lots of booze and drugs!"

"And I like him," I continue, surprising Tim and myself. I've certainly been on the butt end of many a Conolly tirade. Maybe it's the Christmas spirit, maybe it's the good ale, but at the moment, I can't find anything bad to say about Jeff, except for that he's prone to diatribes. In Tim's eyes I could see the next question forming so I answer before he asks. 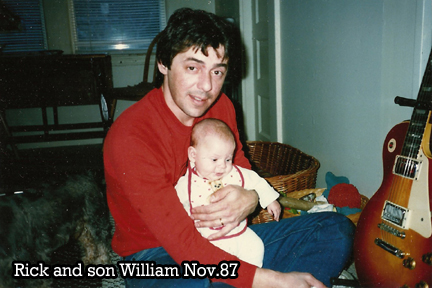 "I was on the fence for a long while. It's hard to explain. I felt old. I AM old. I didn't enjoy the late nights and the long drives anymore. Something left me and I can't seem to get it back. Desire maybe? Or maybe I just wanted out. There was a time when music was the main thing in my life; everything revolved around it, then I found other things that I cared about more and suddenly music was getting in the way. And on top of that, I kept hearing reports about Lyres gigs all over the world, gigs that didn't include any of us REAL Lyres, just Jeff. That nudged me off the fence so last Summer I asked him to think about replacing me. It wasn't easy." 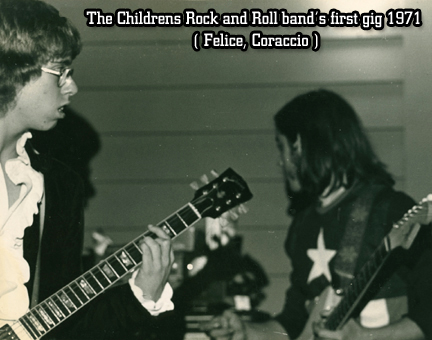 Whenever I see a Lyres gig advertised or something about the Lyres mentioned online, I get a pang in my chest. I miss it. I can't deny that I do. It was the coolest thing I ever did in my life. Still, I know deep in my heart leaving was the right thing to do. Now I'm free to do the next coolest thing in my life, whatever that may be. 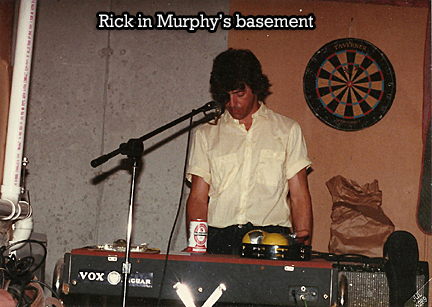 I made arrangements with Murph to pick up my equipment from his basement where we practiced. The chilly Fall air and the dull steel gray noontime sky matched my mood, cold and sullen. I realized that I was here for the last time, this place where Paul and I have done so much since 1971. How many bands has it been? The Children's Rock and Roll Band when Paul and John Felice were still in high school and Ricky Carmel was in middle school! I was the old man at 19. Then there was DMZ, the Shambles, the Last Ones, Lyres, and probably a few other experiments thrown in. I lived here too! Paul and I rented this house from his mother during the early DMZ days. 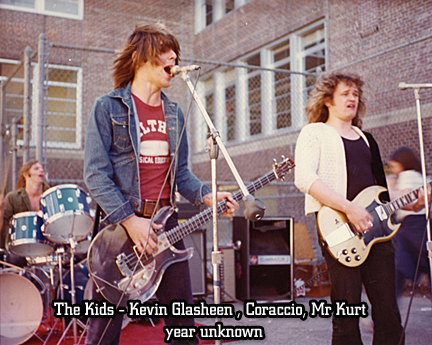 We are both silent as I wrap up cords from my PA, which probably hasn't left this basement since the 80's. The cabinets are dusted with the golden fur of a sweet little sheltie who's been gone for at least ten years now.

Paul breaks the silence, "Let me give you a hand with that."

"Are you sure? It's pretty heavy," I say, mindful of his twitchy back. 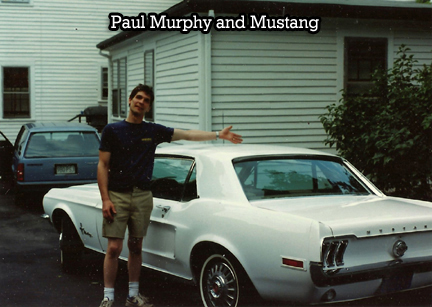 This basement, the site of my recent frustration and boredom, was once so exciting to me. The center of the universe. I couldn't wait to come here and be with my friends. It was musical home base; gigs and tours started and ended right here. And now, for the first time, I won't be coming back. I will be the foreigner, the outsider not privy to the inside jokes spoken in the Lyres dialect.

"Oh well." I sigh, take a final look around, and close the door, painfully aware of the symbolism.

Paul stands next to my truck. His smile genuine as it crinkles the corners of his eyes.

"It was a good ride, Paul," I say. He offers his hand and in typical Paul Murphy fashion, drops three words I never expected to hear from him. 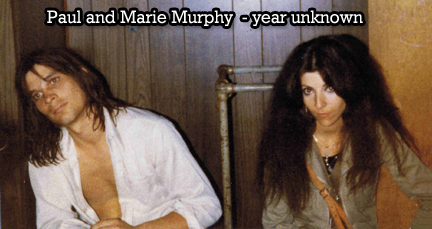